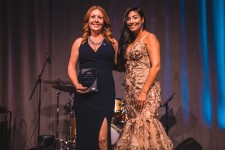 LA JOLLA, Calif., April 21, 2020 (Newswire.com) - Amber Anderson of Anderson White & Associates, a top-producing team with Pacific Sotheby’s International, has been awarded the 2019 International Agent of the Year by the Greater San Diego Association of REALTORS (SDAR).

Selected by their peers for their efforts over the last year, Anderson was among several San Diego realtors who were honored at the Greater SDAR annual Circle of Excellence Awards gala held earlier this year. The International Agent of the Year recognizes well-rounded global agents based on production volume with international transactions, involvement with international committees and organizations, and participation with continuing education in international real estate.

“I feel so grateful to have a wonderful team and supportive leadership that continues to support me year after year,” said Anderson. “This award celebrates all of the international efforts and hard work I’ve put in over the last 13 years, and I look forward to continuing that momentum in 2020.”

In 2019, International viewers made up nearly 63% of overall traffic on Sotheby’s International Realty website. India was the largest source of traffic outside of the United States with a year-over-year increase of 29% and over 6.8 million visits. The United States remains the top country for web traffic, followed by India, Canada, the United Kingdom and Germany.

The Sotheby’s International Realty network currently has more than 21,000 independent sales associates located in approximately 931 offices in 71 countries and territories worldwide. Each office is independently owned and operated.